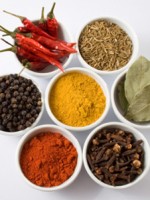 Spice being used to repair brain cells after stroke

Scientists have created a new molecule from curcumin, the key chemical component of the spice turmeric. In laboratory experiments, the molecule was shown to affect the mechanisms that protect and regenerate brain cells after a stroke.

The spice turmeric is known to have many health benefits, yet this is the first significant research to show that it could be beneficial to stroke patients by encouraging new cells to grow and preventing cell death after a stroke

Turmeric is a spice made from grinding the roots of the Curcuma longa plant, also called curcumin. It is a prime ingredient in curry powder and figures heavily in Asian cuisines. Because it imparts a vivid yellow color to the food it is cooked with, it is often used to color as well as flavor condiments, rice dishes and sauces.

Turmeric’s active ingredient is curcumin. It is thought to be an anti-inflammatory, as well as an antioxidant. Antioxidants are substances that are thought to help prevent aging by inhibiting the breakdown of cells by oxidation.

10 Comments on this article